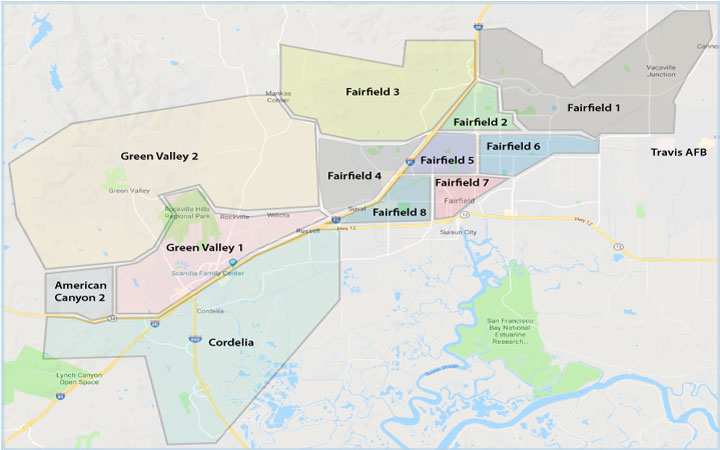 Home to the Travis Air Force Base, the headquarters of the Jelly Belly candy company, and a large Anheuser-Busch brewery, Fairfield, California is nestled in the heart of the San Fransisco Bay Area. Fairfield is often considered the midpoint between San Fransisco, Sacramento, and Oakland at an average of 40 miles away from each, providing easy access to careers in virtually every field. Fairfield is also just minutes from the San Pablo Bay, Napa Valley, and numerous other points of interest across North California.

A Cultural History in California

The land that is now Fairfield was once inhabited by Native American tribes, including the Ion culture who called the Rockville and Green Valley areas home for generations. In excavations of the area, scientists found artifacts dating back five to six thousand years – some of the oldest traces of Native American communities in California.

The early 1800s featured several skirmishes between Spanish and Mexican settlers and Native tribes, which ultimately culminated in Captain Robert H. Waterman, a clipper ship captain who had been around the world five times, claiming a land grant for the area, which he named after his hometown of Fairfield, Connecticut. In 1958, he a made a proposition to have the county seat moved from Benicia to Fairfield; in exchange, he donated 16 acres of land for the construction of county buildings. The first county buildings were constructed two years later – a courthouse and a jail. In 1903, Fairfield was officially incorporated as a city.

A Dynamic City to Call Home

Like many other cities across the Bay Area, Fairfield's explosive growth in the mid- to late-1900s made it what it is today. Going from a population of just 3,100 in 1950 to around 110,000 today, Fairfield is a popular destination for white-collar commuters as well as middle-class families.

Unlike many other communities across California that are small in geographical size, Fairfield is far more spread out, with a total of 41 square miles making up the city. Most residential neighborhoods are situated around Interstate 80, which traverses the city. To the North is the Vaca Mountains, part of the easternmost edge of the Inner Coast Ranges, and to the South is the Suisun Marsh, a part of the San Francisco Bay tidal estuary.

Real estate prices in Fairfield are consistent with the rising rates across the region, with the median price hovering around $493,000. According to Trulia, prices increased around 8% over the last 12 months with similar increases projected over the coming years, making now a great time to invest in residential property.

Northern California is beloved for its access to outdoor recreation, and Fairfield is no exception. The city features eight prominent parks, including Rockville Hills Regional Park, Alan Witt Park, and the golf courses at Wood Creek Park. For those who love art and culture, Fairfield has plenty to offer, with destinations including the Downtown Theatre, Lawyer House Gallery, Suisun Valley Antiques and Collectibles, and even the Western Railway Museum. Residents can also enjoy a Farmers' Market every Thursday in the summer, the popular Tomato and Vine Festival, and easy access to dozens of area wineries, like BackRoad Vines, Blue Victorian Winery, Galvan Family Cellars, and Tenbrink Vineyards.

From a bustling real estate market to significant green space, Fairfield, California has a lot to offer. Whether you're looking for a great place to call home in between Sacramento and San Francisco or simply want easy access to some of wine country's best vineyards, Fairfield boasts a little something for everyone.

About Fairfield and how our local MLS divides up the search areas.

Looking for a home or condo in Fairfield CA? Our MLS divides Fairfield into 11 areas (see the map above). Use the links in the sidebar to see recent real estate listings in Fairfield. Once you click on an area page, we include some information about the price range of homes in that area, along with average selling price, average sqft and the year range of homes built.

Use the advanced search to narrow your Fairfield Home search by an area noted in the map, price range, minimum beds/baths, minimum lot size, year built etc. You can also use the map search tool to pinpoint specific areas of interest and draw the area with the polygon tool to return MLS listings in that area.

If you have any questions please call, text or email. We'd love to earn your business.

First time for sale since construction in 1966. Home is gingerly cared for with many updates. We welcome all financing and/or cash. Approx 1100SF, 3 bedrooms, 2 upgraded ...

Just renovated 3 bedroom, 2 full bathroom Home on a court. Convenient to TAFB, HWY 12, and I-80. Upgrades include: fresh paint inside and out, new texture, new flooring, ... 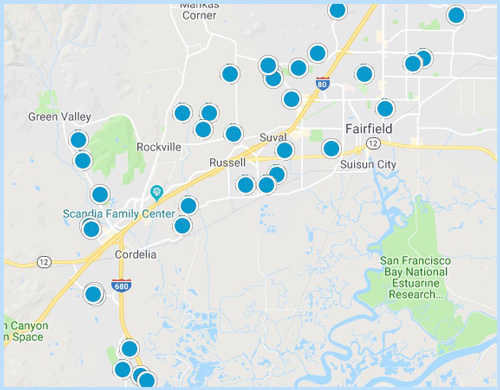