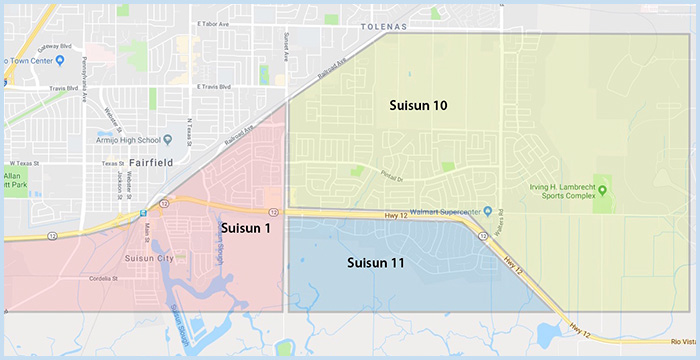 Born out of the California Gold Rush in the 1850s, Suisun City is among the crown jewels of Solano County. Named for its proximity to Suisun Bay, which is named for the Native American Suisun people, Suisun City is home to around 30,000 Californians, offering a comfortable place to live, work, and play in the greater San Fransisco Bay Area. Home to amazing restaurants, stunning local art, and plenty of ways to escape into the great outdoors, this small city offers a lot to love.

Like many small towns along the California coast, Suisun City was founded during the California Gold Rush. With thousands of eager settlers streaming into the West in pursuit of riches and opportunity, the greater area saw explosive growth. Suisun City in particular became a hotspot for new locals, as its location was the perfect connection between the foothills and the Bay Area. The strength of this was only amplified with the introduction of the First Transcontinental Railroad in 1869, which connected Suisun City to the California Pacific Railroad.

The city was built on transporting grain between the Vaca, Suisun and Green valleys. Unfortunately, this boom did not last; while the city escaped the Great Earthquake of 1906 without much damage, a raging fire destroyed much of the downtown area just months later, changing the landscape of the area forever. The region rebounded in the 1960s and 70s with the mass migration to the Bay Area, however, with the population increasing tenfold between 1970 and the present.

In 2018, Suisun City celebrates its 150th birthday, demonstrating the resilience and dedication of both early settlers and modern residents alike.

Beauty and Culture in Solano County

While commerce has returned to Suisun City in the century following the fire, today's downtown area caters to both locals and tourists. Full of delectable dining options, plenty of shopping, and significant opportunities for enjoying outdoor activities, Suisun City is the area's new hotspot for overnight getaways and day-trippers.

Suisun City is known for its dedication to nature, with activities that include bird watching and exploration at Rush Ranch, kayaking at Suisun Marsh, and hiking and fishing at Grizzly Island. Visitors can also enjoy Peytonia Slough State Ecological Reserve and Suisun Wildlife Center, providing a wonderful way to get outside and enjoy California's natural wonders.

Culture doesn't stop there, however; there are plenty of places and events to explore, from The Lawler House Gallery to occasions like the Waterfront Festival and the Art, Wine, and Chocolate Festival.

A Perfect Place to Settle Down

For those looking for a place to build a future, Solano County has a lot to offer. As a bedroom community for the Bay Area, plenty of professionals working in San Fransisco love coming home to Suisun City. Housing prices are relatively affordable in the greater area, with averages around $385,800. However, rates are on the rise with growth of 5.7% over the past year and an estimated 9.3% in the 12 months to come, according to Zillow. If you're considering a home purchase, now is the perfect time to make your move.

From the miles and miles of ecological parks and nature preserves to a history spanning 150 years, Suisun City boasts a little bit of everything. Whether you're a fan of fine dining along the waterfront or prefer to spend your weekends on the hiking trails, this beloved destination is a diamond in the rough in Northern California.

Looking for some sweat equity and a investment opportunity? This 4 bedroom single story has open floor plan just needs a little tlc to make it shine. Spacious lot with lo...

Gardeners Delight with a variety of mature fruit trees throughout the back yard. There are also beautiful flowering plants, a Coy Pond and an impressive pepper-tree in th...

Lovely 3 bed/2 bath home nestled in the older section of Suisun near the Marina. Big primary bedroom with ensuite and laminate floors. Other two bedrooms have carpet. W...

Ready to Kick off your Summer with a move in ready 4 bedroom/2-bathroom home very close to shopping and restaurants. Great Spaces for entertaining your friends and famil...

Great opportunity to own your own home in the desirable neighborhood of Heritage Park in Suisun. Featuring vaulted ceilings in the living and dining room. Fireplace featu...

Nothing to do but move in. No rear neighbors, 3 bedrooms, 2 bathrooms and almost 1200 sf. This home offers a newer roof, newer paint and newer windows. Location is jus...

Huge Barn ready to be convert it to 2nd unit or in-law and the big lot has possibilities for multi-unit (check with county). Home with many upgrades waiting for you to en...