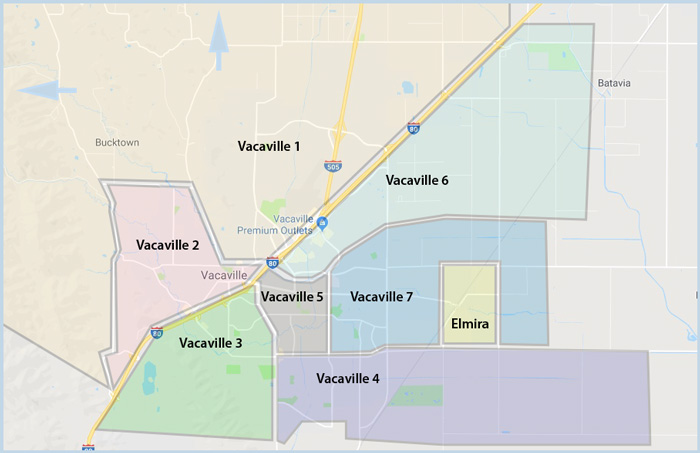 A small city considered to be part of both the San Francisco Bay Area and the Sacramento Valley, Vacaville is home to nearly 100,000 Solano County residents. A bastion of California's eco-friendly culture, Vacaville is the electric car capital of the U.S. with dozens of charging stations scattered throughout the metro area, providing a perfect resource for commuters into San Francisco, Sacremento, or Oakland. With desirable tourist attractions, like the Nut Tree and Lagoon Park, and a rich cultural tradition, Vacaville is a great place to work, visit, and live.

An Integral Part of California's History

Vacaville is not named for cows as many believe – the Spanish word for cow is "vaca" – but rather for Manuel Cabeza Vaca. Vaca sold his portion of a Mexican land grant to William McDaniel in 1850, who used the space to create the city of Vacaville. Vacaville was formally incorporated in 1851.

Early Vacaville was beloved by farmers for its lush, rich soil, with substantial land dedicated to produce companies and local farms. This primary use of land in the 1800s and into the 1900s led to the creation of the Nut Tree in 1921, a large development that is now a tourist attraction in Vacaville. In its infancy, the Nut Tree was a roadside fruit stand that grew into a dining destination featuring local fruit.

Today, Vacaville is an exciting, energetic place to live, with strong cultural influences relating to both its proximity to the produce industry and its Mexican roots. The city is perhaps best known for the Nut Tree, which remains one of Vacaville's most beloved attractions. Despite a brief closure in the mid-2000s, the area is currently in the final stages of a $255 million development plan. It now includes retail space, an event center, an amusement park, and apartment housing. The beloved Fiesta Days festival also harkens back to Vacaville's history, featuring a parade, golf tournament, concerts, and performances each May that touch upon both Mexican and Western themes.

Within the Nut Tree and beyond, Vacaville is home to a thriving art and cultural community, with area events available all year round. Options to visit, see, and explore include the Center for Freedom and Flight, Pena Adobe Historical Society, Vacaville Art League & Gallery, and the Vacaville Museum. Visitors can also explore Lagoon Park, a 470-mile park complete with stunning hiking and biking trails. With trails ranging from two to 20 miles, adventure-seekers of all interests can find plenty to love about this idyllic destination.

Vacaville is also considered one of the most dog-friendly cities in the county, with dozens of locations that permit pets to accompany their human companions, from stores to restaurants.

For families considering Northern California, Vacaville is a wonderful place to settle down. Just 55 miles from San Fransisco and 35 miles from Sacremento, Vacaville makes both living and commuting easy. And, as the real estate market continues to grow, now is the perfect time to buy. According to Realtor.com, the average home sells for $475,000, with average increases annually of around 2% – a lower growth rate than many nearby areas.

Whether you love historic California destinations or you simply want a quiet, comfortable place to call home, Vacaville has a lot to offer. From the local commitment to arts and culture to its convenient location for commuters, you'll find everything you're looking for in Solano County's favorite city.

Here's your opportunity to purchase a lovingly cared-for home in the City of Vacaville. This 3 Bedroom, 2.5 Bathroom, plus Bonus Sunroom is absolutely gorgeous throughout...

Come see this beautiful newly updated home in a quiet established neighborhood. There are modern finishes and fixtures throughout. The lower floor was remodeled to provid...

Super cute single story in a court location! This is a perfect 1st time buyer or investment property centrally located in Vacaville. The inside features laminate flooring...

Centrally located in the heart of Vacaville, this beautifully maintained home is move in ready! This two-story home features an open floorplan that is sure to please eve...

Regency Park Duet Home: Enter into the living room with a full two story vaulted ceiling which opens up the 2nd story balcony and a fireplace. Seperate Family room, dinin... 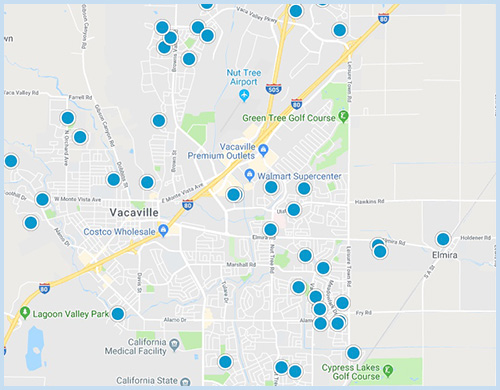